About a year ago I was wandering through Goodwill on my weekly treasure hunt when I spied something I absolutely had to have: A Mid-Century wooden ice bucket with tarnished faux brass handles, priced at a mere $2. Back in the day everybody had one of these, and now I think every thrift store has one. Just like they always have a brass chandelier from the early 90s. But I digress. 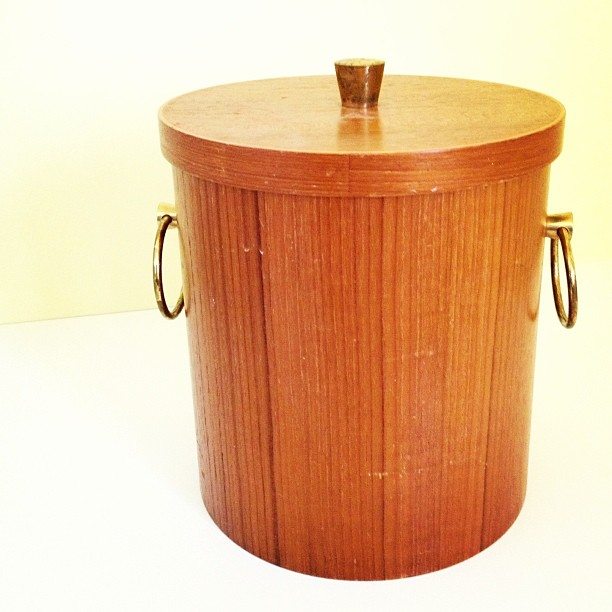 Now, I have no real use for an ice bucket, but I figured it would come in handy at some point to hold something – at that point yet to be determined – and there was something about it that made me absolutely have to own it. And so I bright it home and stared at it for weeks on end, thinking of and then scrapping at least a half dozen revamp ideas. Then, just when I’d nearly forgotten about the ice bucket, my friend Amy from Mod Podge Rocks! announced that she was coming out with a line of Mod Podge stencils. I knew right away that it was time to revisit the idea of the ice bucket makeover.

Materials for this project were provided by Mod Podge Rocks! and Plaid Crafts; all opinions are 100% my own. 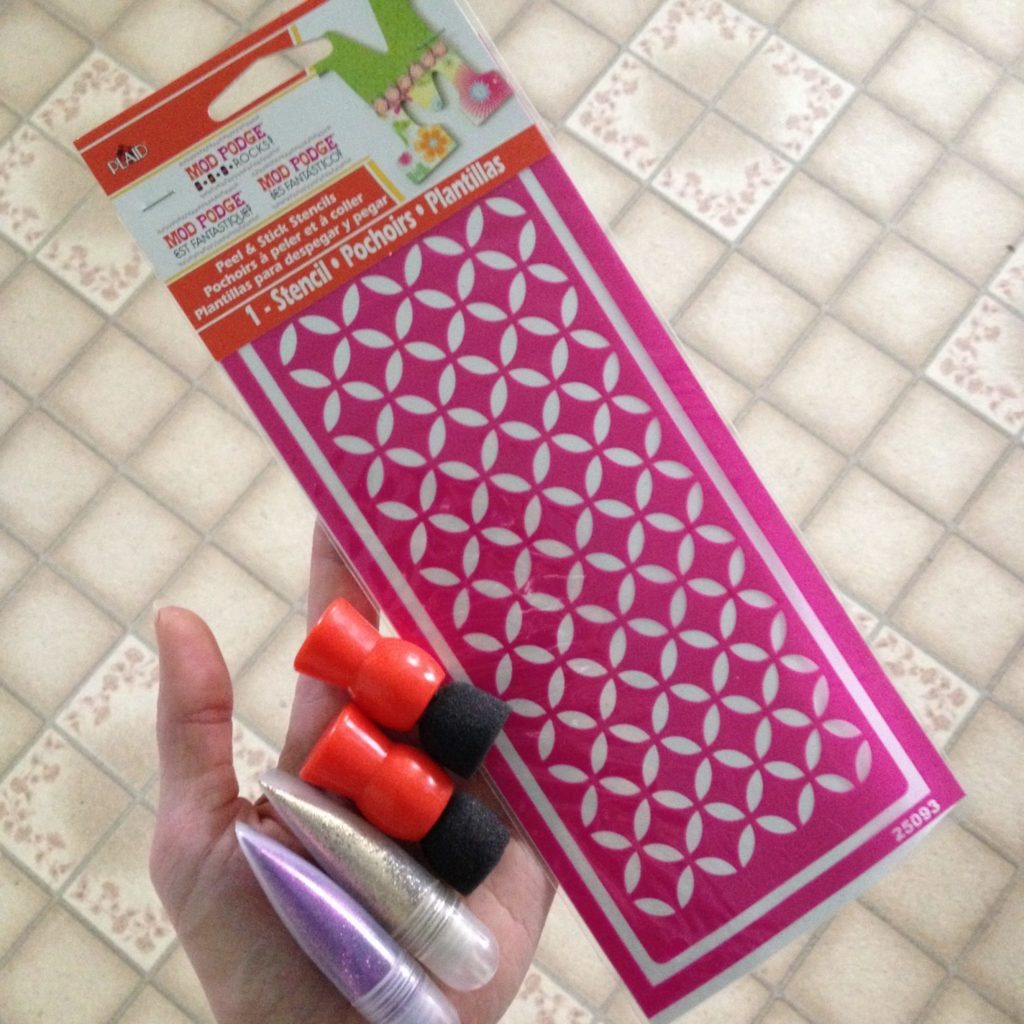 I was super excited about the stencil as soon as it arrived – the stencils come in a variety of all-over patterns and I just LOVE the one that I chose! My package also came with a couple of foam spouncers (seriously my favorite craft term ever) and a couple of tubes of glitter. (Want to get your hands on one of the stencils to try them out for yourself? They are available exclusively at Michaels Stores!) 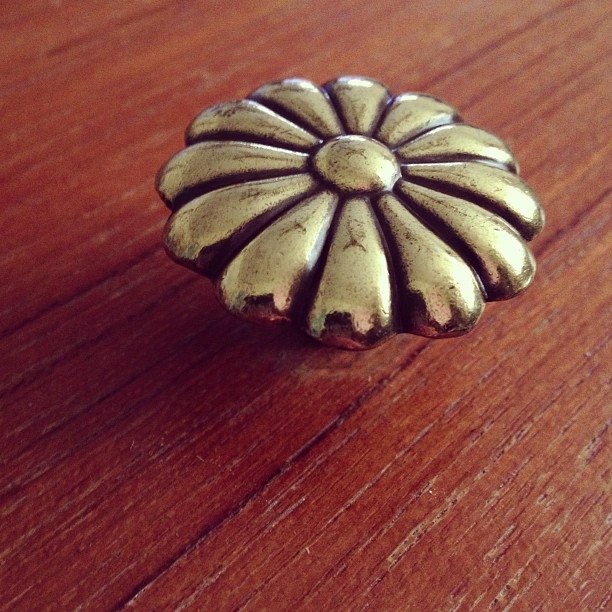 I figured that using the stencil to add some texture to the ice bucket and giving it a bright paint job would be a fun way to give it an update while still keeping true to the original character of the piece. I had previously bought a new knob for the lid to replace the plain, beat up original one, but that was as far as I’d gotten in the actual design process. 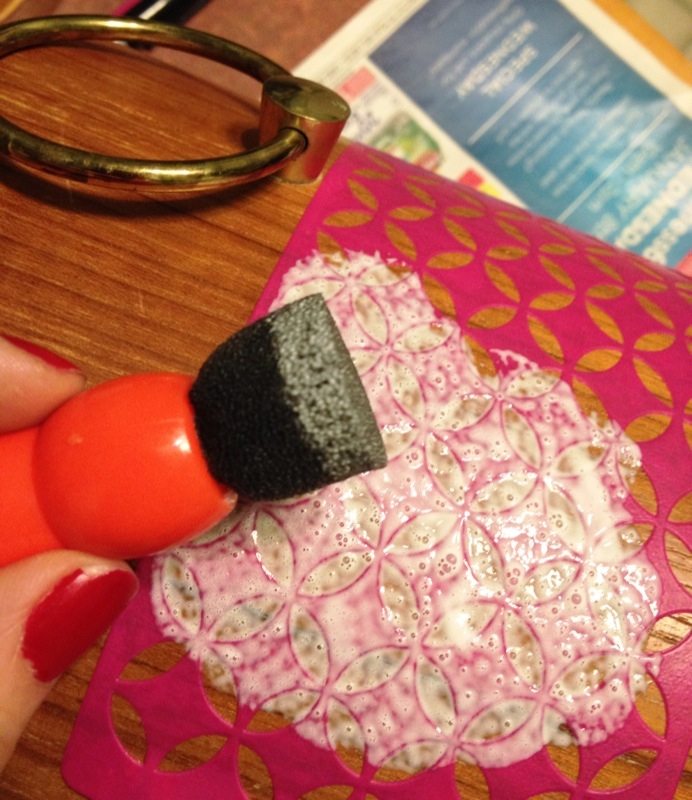 I decided to add just a little texture, putting a stripe of the pattern all the way around the bucket. After placing the stencil for its first impression, I used a spouncer to apply Mod Podge to the entire thing in an even, fairly generous layer. Peel away the stencil, then sprinkle glitter over the Mod Podge; tap off the excess and set it aside to dry. (I used glitter with a fairly coarse texture to get the look I wanted; you could also use sand in place of glitter.) Meanwhile, rinse off the stencil and spouncer.

The stencil is reusable up to 20 times. I was super impressed with the durability of the stencil – I have used several different brands of peel-and-stick stencils and none of them have the same thickness. Other stencils with this level of detail often require extra care to make sure you don’t tear the finer areas of the design, but this one? This one I could rip of like it was a band aid without any fear of damage. I really, really like this stencil. I think I might be developing feelings for it. And since I only used it three times to go around my bucket, it still has plenty of life left in it for future projects! 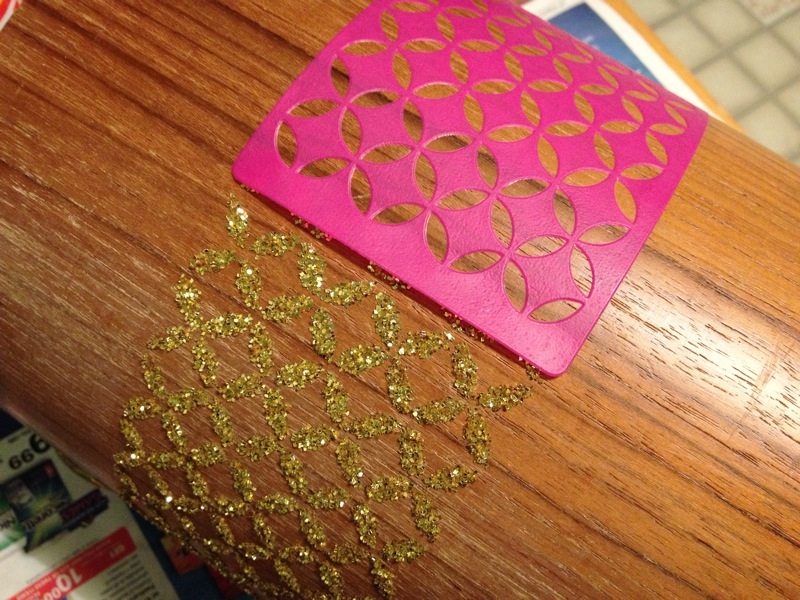 Now, check your first impression of the stencil. Is the Mod Podge dry? Good! Let’s move on. Use a soft bristled brush to remover any remaining excess glitter, then line up the stencil for the next impression and repeat with the spouncering and glittering. Keep going in this fashion until you’ve added texture to the entire desired area.

At this point, it looks kind of silly and cheap, but don’t worry. The paint will make a world of difference! Remove any hardware you can from the bucket before painting. The knob on my lid was easy to take off but there was no way to remove the side handles without destroying the bucket, so I masked them off with tape. Then it was off to the spray booth! 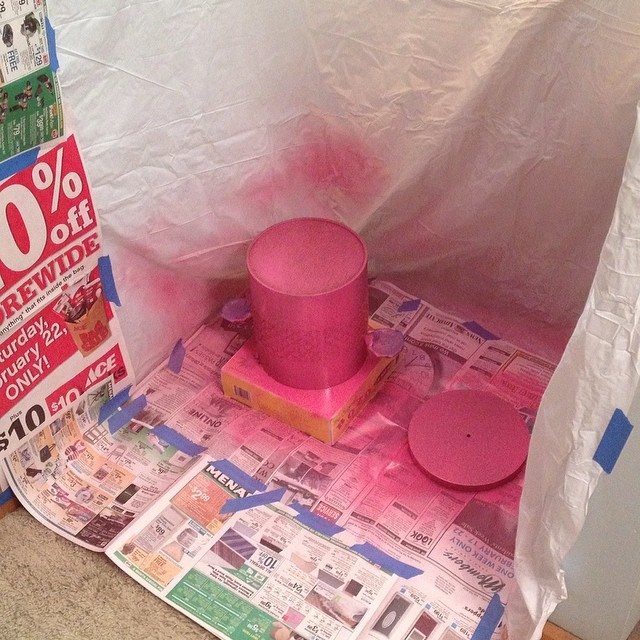 Okay, desperate times call for desperate measures, and I’ve been putting off a bunch of spray paint projects due to this neverending winter weather. So I used dollar store shower curtain liners, newspaper, and masking tape to protect my bathroom, kicked on the exhaust fan, and voila! A makeshift spray paint booth.

Tip: I put my bucket upside-down while spraying to avoid getting any paint on the inside. Give the whole thing a few coats of paint. 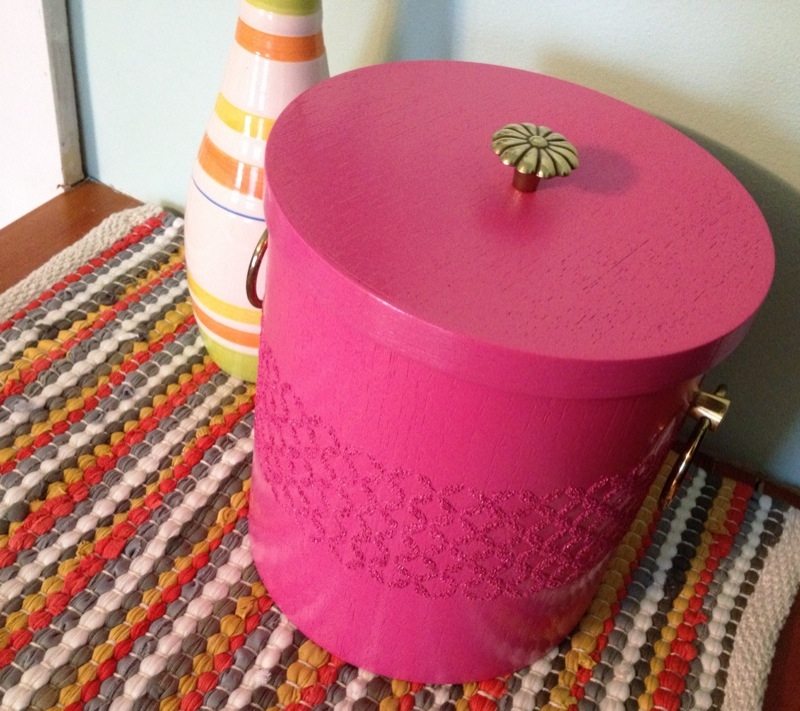 When the paint dries, unmask and/or reattach the hardware. I am pretty find of the pink that I chose, even though it was kind of a risk and at first I wasn’t positive I would like it. I almost went with an aqua or teal color instead, but the can of pink paint kinda screamed at me from the shelf and I swear it practically leaped into my cart. The bucket just really wanted to be pink. What do you think?

It now resides on my kitchen counter, where it keeps some random odds and ends out of view and out of reach of my cats’ curious little paws. 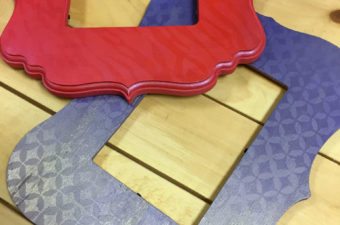 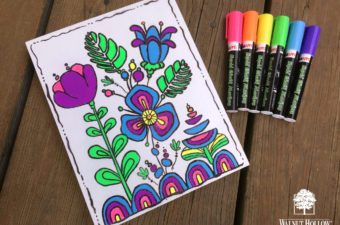 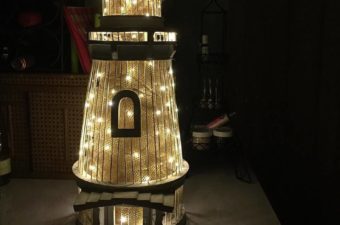 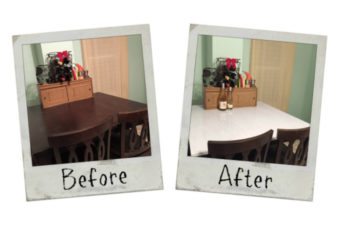 Turning Our Old Table Into a Kitchen Island