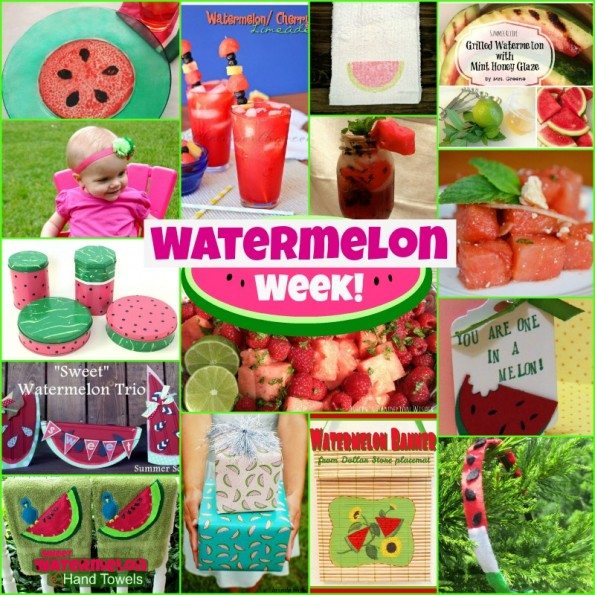 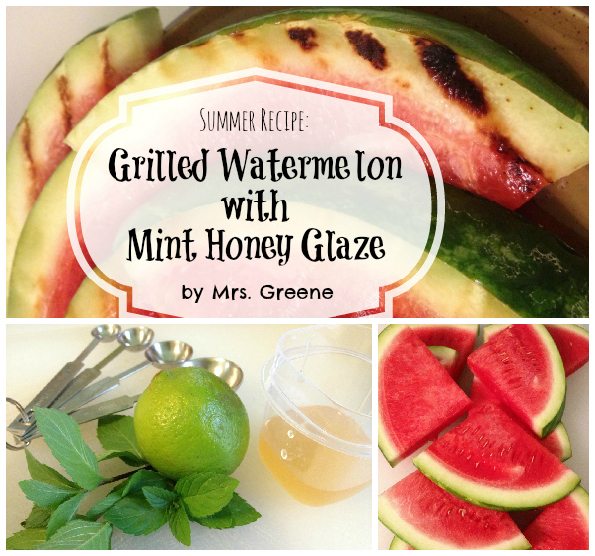 When I was invited to participate in Watermelon Week I knew right away that I wanted to come up with a yummy recipe. This was partly because I love any excuse to eat watermelon, and partly because I already made a watermelon craft recently so a recipe would make for a nice variety of watermelon ideas. We’ve been grilling a lot of different fruits lately, so I thought, why not grill some watermelon too? And so was born my idea for grilled watermelon with a mint honey glaze!

You will want to make the honey glaze first, as it takes some time for the mint flavor to be absorbed into the honey. Stir together honey, chopped mint leaves, and lime juice in a small container. Cover the container and let it sit for at least 4 to 5 hours, preferably overnight. As it sits the mint will rise to the top of the mixture; shake or stir the container frequently to redistribute the mint through the honey.

After the mixture has sat long enough, strain out the mint leaves. I poured my mixture through a tea strainer to separate the mint. 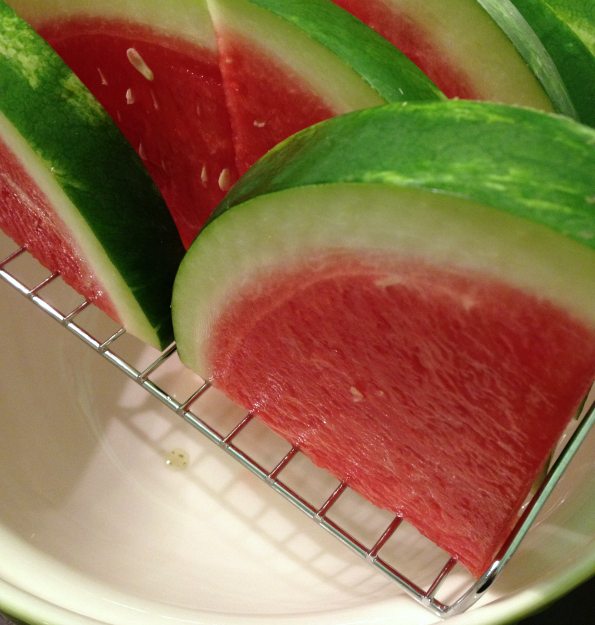 Start out with nice, thick slices of watermelon. Lightly salt each slice and let it sit upright to drain for about a half hour before glazing. (I placed mine on a cooling rack over the mouth of a large bowl to catch any drips.) Rinse the salt off of the slices with cold water and press gently but firmly with a paper towel to dry. Brush the slices with the honey mixture.

The grilling is the tricky part. If you leave the watermelon on too long it will start to cook and instead of tasting like watermelon with a yummy, caramelized coating, it will taste more like squash. Which I guess isn’t such a bad thing if you really like squash, but to me it’s kind of icky when you’re expecting something refreshing! Put the slices on a hot-hot-hot grill just long enough to make grill marks on each side, then promptly remove. Leave the grill lid open to avoid cooking the watermelon – you want it to stay nice and raw in the center. 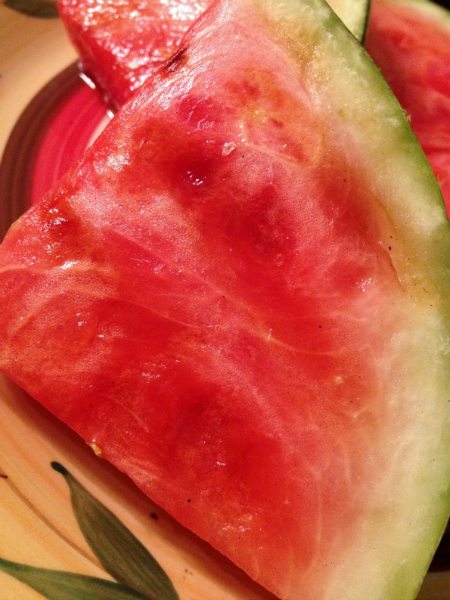 This piece could have used a slightly hotter grill. Unfortunately I was cooking over charcoal because we are out of gas and this was toward the end of the coals, since we cooked the meat first, so the dwindling coals didn’t provide the nice sear I would like to have seen on it. So if your pieces look like this, more heat is the answer!

To make sure you stop the watermelon from over cooking once you’ve taken it off the grill, put it on a plate in the freezer for a few minutes to pull down the temperature. Then devour it! Even the pieces that didn’t get nice grill marks tasted yummy – you could taste the smoky flavor of the charcoal and it added an interesting extra flavor dimension.

When you’re done drooling over the grilled watermelon, make sure you also check out today’s other Watermelon Week features! 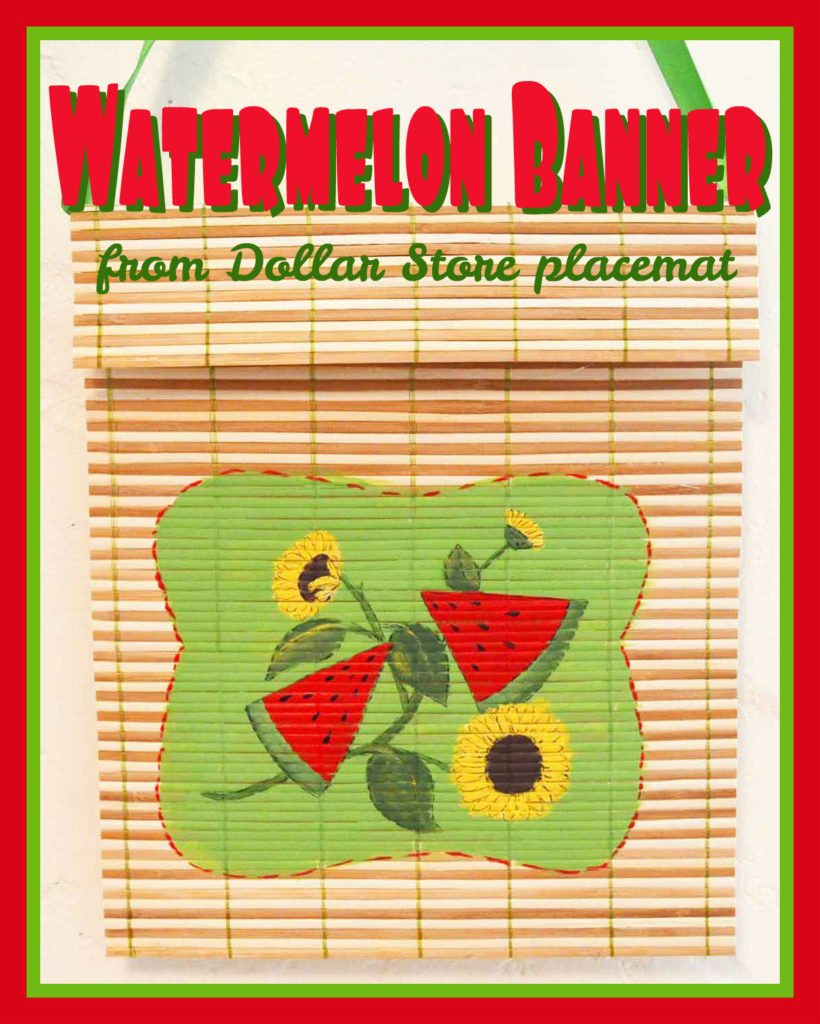 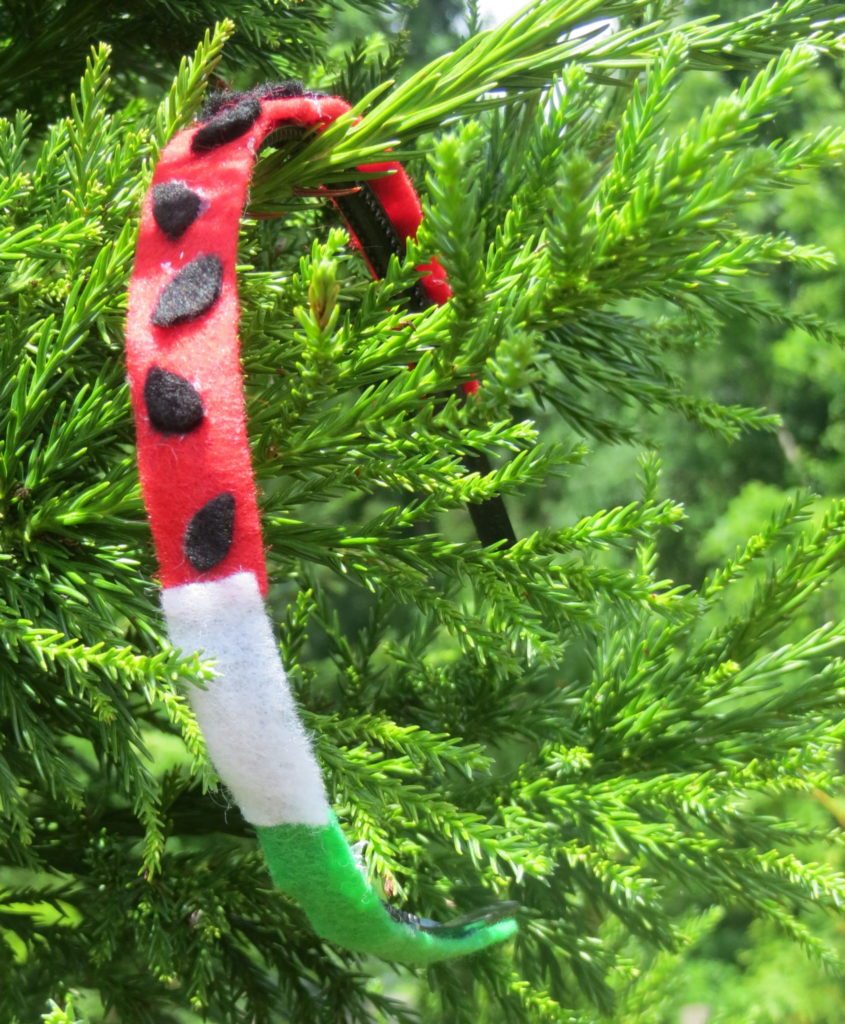 There is still one more day of Watermelon Week left – don’t forget to drop in tomorrow to see the rest of what is in store! 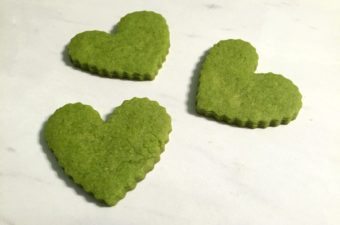 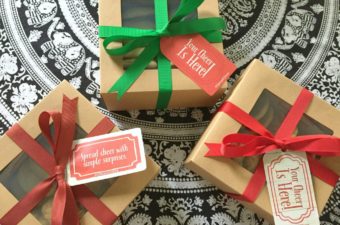 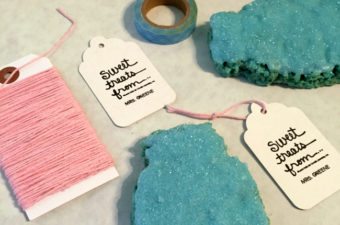 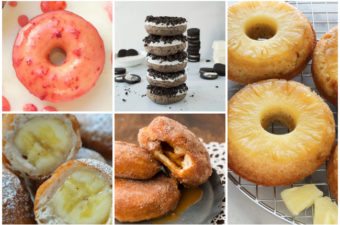